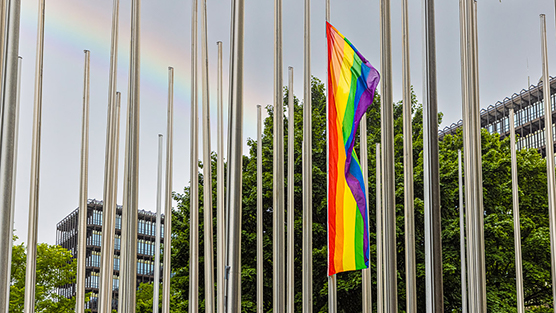 If you
walked past the EPO headquarters (Bob-van-Benthem-Platz 1) today, you may have
noticed the iconic rainbow flag. For the second year in a row, the Office marks
the Munich Christopher Street Day celebrations by flying the rainbow flag, a symbol
of pride in and around Lesbian, Gay, Bisexual, Transgender and Queer (LGBTQ+)
communities.

Vice-President
Corporate Services Nellie Simon and a group of staff met at the Isar building to
raise the flag on behalf of the Office.

Beyond the
gesture’s symbolic value, raising the rainbow flag reflects the values of
pride, tolerance and harmony the Office strives to promote. Christopher Street
Day celebrations are increasingly important as the rights of LGBTQ+ communities
continue to have to be defended worldwide. Once again this year, the EPO and
its staff celebrate Pride with the same enthusiasm, despite the pandemic
restrictions.

As an employer of choice that vigorously supports diversity
and inclusion (D&I), the EPO puts a great deal of importance on LGBTQ+
related aspects. Its focus is set on making sure that also our LGBTQ+
colleagues feel respected and accepted in their daily work.

The
Office considers thereby a wide range of aspects including recruitment. So the Office was present last month at Sticks and
Stones, Europe’s largest LGBTQ+ career fair. The online event provided also new
sources of inspiration for the EPO’s approach to D&I and a further opportunity
for gathering best practices on LGBTQ+ topics related to the work environment.

On 6
August, the rainbow flag will fly at the New Main building to coincide with the
Pride week festivities in Amsterdam.

Though now a global celebration of diversity,
Christopher Street Day has its origins in civil rights protests. The movement
began as a response to police assaults on members of the LGBT+ community
in New York in 1969. A decade later, in 1979, Berlin and Bremen became the
first German cities to start commemorating the protests, with Munich following suit
in 1980. Celebrations in Bavaria’s capital usually attract crowds of more than 150
000 people.